Fettuccine Alfredo, the pasta dish prepared with extreme simplicity but with unique and genuine taste. What is now renowned as one of the masterpieces of Italian cuisine, was born out of love of a chef towards his wife.

A first course that has become, over the years, a symbol of Italian cuisine abroad. The Alfredo Fettuccine recipe is famous for one thing. Simplicity. Only three ingredients are enough to create a culinary masterpiece: egg fettuccine, heavy cream, and parmesan. In Italy, Fettuccine Alfredo is not that often cooked at home or in restaurants. Contrarily to Italian traditions, this pasta recipe is very common in the United States and is considered a typical dish of the Italian tradition, almost as much as pizza, lasagna, and tiramisu. 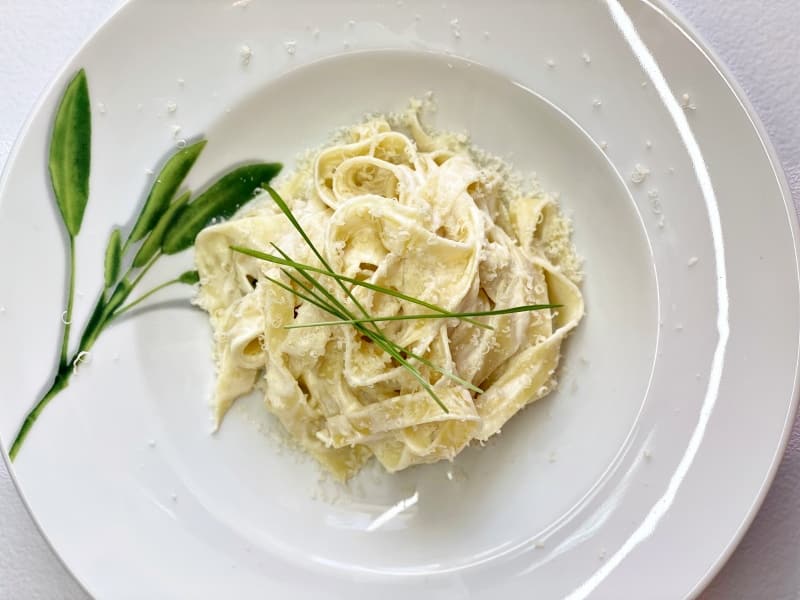 Where was the Fettucine Alfredo recipe born?

The history of pasta at Alfredo seems to date back to the fifteenth century when references are found to the Fettuccine Alfredo for the first time. The authorship of the recipe was claimed at the beginning of the 1900s by two Roman restaurants. However, it is still unclear which of the two invented the original recipe, also known as “to the three butters “.

It is said that the Alfredo Fettucini recipe was actually born in Italy, however, it almost happened by mistake. A certain Alfredo, in order to make his sick wife feel better, one day prepared pasta with butter and parmesan in the Rome restaurant where he worked. The wife was impressed by the pasta and encouraged Alfredo to serve it to the guests. At that time, there were Americans dining often at the place, and after trying the pasta, they decided to take the dish recipe overseas. It is believed it all happened in the years of the Dolce Vita, those during which everything that spoke Italian or that had a semblance of Italian seemed to be a must. 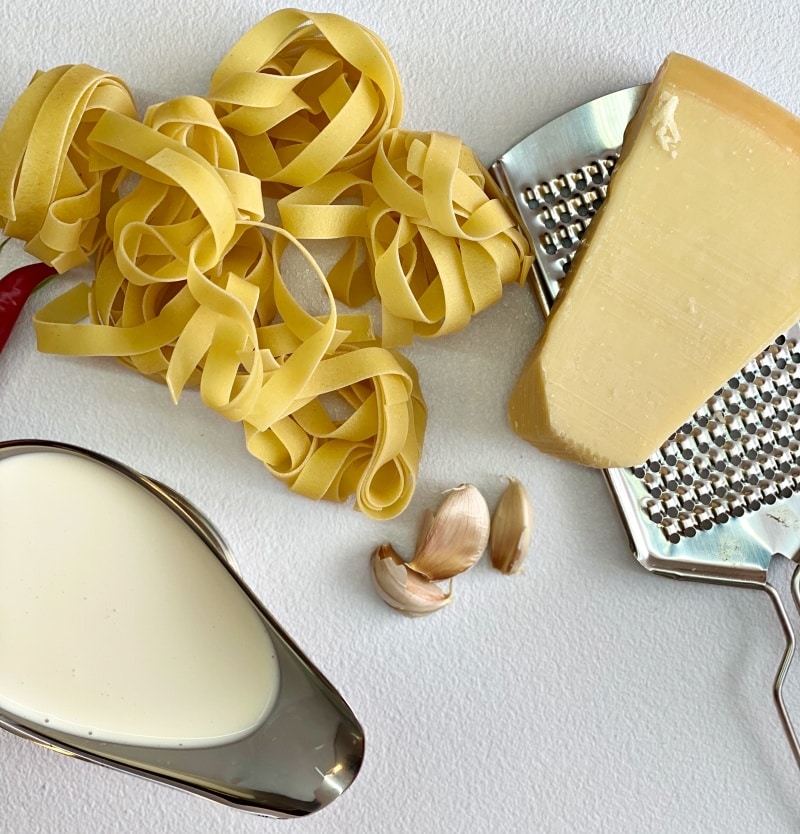 The preparation of this recipe is quick and easy and, after all, we could also call it “cream pasta”. The specifics of this simple yet delicious pasta is the creamy sauce, which is formed by combining the melted butter with cream cheese and the Parmesan. See the simple and basic ingredients of the Alfredo Fettucine

Note: If possible, use real freshly grated Parmesan. Its flavor differs considerably from that sold already grated. The fresh Parmesan also tends to incorporate better into the sauce, avoiding the formation of unpleasant lumps.

How to cook the Fettuccine?

Let’s start with the pasta. You’ll need one pan to boil pan the pasta.  Always boil pasta in boiling, well-salted water. A lot of water. The more water you have, the better for the pasta. Also, always follow the instructions on the pasta pack. Cook the pasta “al dente”, this way you make sure it will absorb better the liquids from the sauce. This is how you get a pasta “Stupenda”!

When the pasta is ready, take it out of the pan and put it in the pan with the sauce. Do not drain the water. Transfer the fettuccine along with the water it naturally retains while passing it from a pan to another. 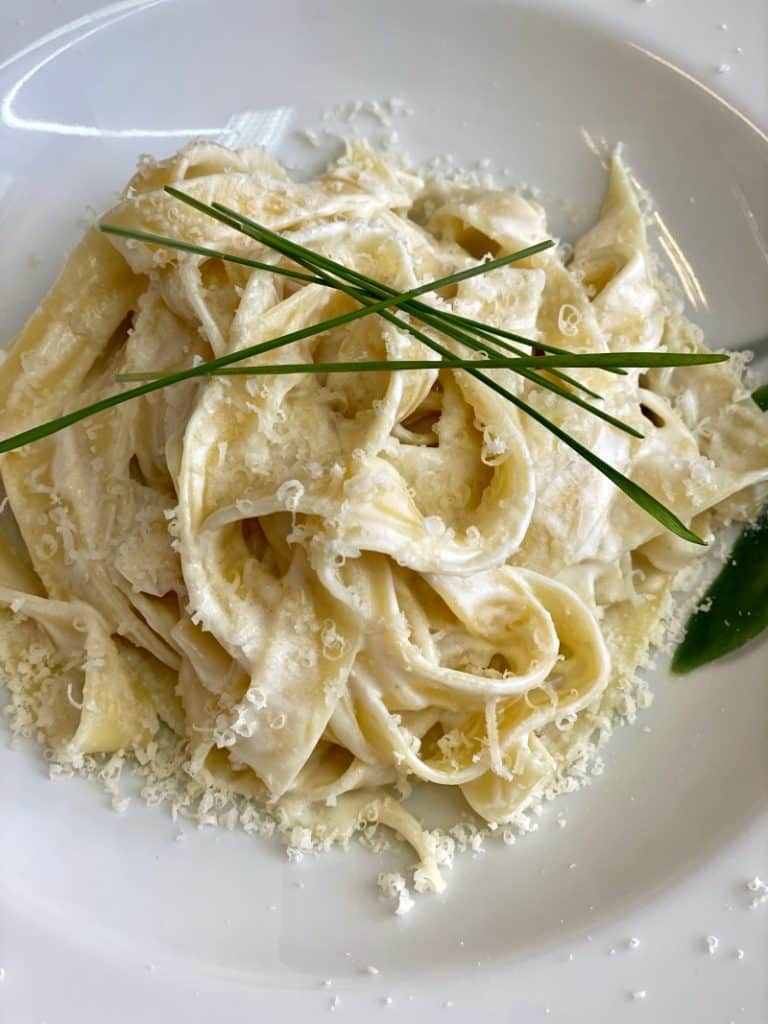 How to cook Alfredo Sauce?

You can prepare the delicious fettuccine Alfredo in a simpler than the simple way. For that, you’ll need one pan for the sauce and one boiling pan for the pasta.

Now the sauce. While pasta is getting to the “al dente” boiling degree, take a pan and place it on a stove at medium heat. I like garlic so I minced a couple of garlic cloves and threw them in hot butter. If you don’t like the pronounced aroma and taste of fresh garlic, stick to the granulated one. Or, simply avoid it.

Then, add the heavy cream and let it reach a boiling point then add the grated parmesan. Always mix to avoid lumps formation. Then in about 30 seconds take the pan off the stove.

If the sauce boils too intensely, reduce the heat. Physics explains better why. When the cheese is heated too quickly, its protein molecules tend to aggregate rather than separate. High heat disrupts the fat and moisture contained in the cheese, transforming it into a compact product that does not melt. In simple words, you’ll get a bland sauce and waisted products.

That is all. Very simple yet incredibly delicious. Explore Italy through its kitchen!

How to serve Fettuccine Alfredo?

Season with salt and fresh reel pepper and serve immediately by transferring the Fettuccine Alfredo to the serving dishes. Enjoy!

Interesting fact: February 7th is officially declared the  “National Fettuccine Alfredo Day”. On this day, Italy and the USA come together to celebrate one of the most loved Italian dishes in the world: the Fettuccine Alfredo. 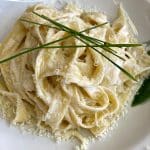 Get free recipes to your inbox!